Right from the start the impressions are overwhelming, already while you are still about to land at the Kathmandu Airport.

While flying in, I recognized the many houses being built as close as somehow possible to the runway, followed by the hustle and bustle in the airport and - last but not least - the people looking forward to meeting those who just arrived in front of the airport. In the moment I left the airport, I was really distressed by seeing policemen pushing back the waiting people into a non-marked area which they considered to be appropriate using thin sticks. But seeing Ann-Katrin and Jörg again after such a long time made me feel so happy and grateful that I could push back the earlier scenery quickly.

From the airport, we took a taxi to the Gusthouse in Thamel where we stayed at for the following nights. My first impression of the city was loud, dirty and chaotic. Roads were mostly blocked by cars, motorbikes, tuktuks, busses, and rickshas, leading to a really slow moving traffic and an enormous amount of smog in the air. Hence, it was not a surprise to see about a third of people wearing masks to avoid inhaling the smog. Drivers would be hitting their horns for more or less obvious reasons and people would squeeze through the little gaps to cross the road (even I had to learn just to walk ahead, otherwise I would never have crossed the road 😃). After having arrived in our really nice and comfy accommodation, we decided to go to a cozy café around the corner to catch up on the last 6 months 😊 This is also where I experienced my first of quite a few power outages as the power supply rather underlines the first impression of Kathmandu being a "chaotic" city. The Nepalese generation of power, however, is called to be reliable, stable, and environment-friendly thanks to the usage of hydropower for most of the required energy in the country.

On the next morning, after a delicious, ample breakfast, we decided to explore the city by foot. Our first stop was at the Clock Tower, right next to the College. Despite the fact that it was holiday season, we were allowed to access the area and caught a first sight on what the earthquake in April 2015 had caused. There are still cracks at the walls of many buildings, partially held by stabilisors to avoid further damages. Seemingly, the donations for re-building reach the people in need only slowly and in some cases, also a technical solution is still missing.
Our next target was the former King's Palace which has been turned into a museum a few years back to memorize the massacre which had taken place there in 2001 and in which the whole family died (it is said that the massacre has been initiated by the King's son who also died). From there, we moved on to the houses of the Prime Minister and his Cabinet as well as the Parliament. In Nepal, the monarchy has been disposed in 2008 and at the same time the transition into a "constitutional democratic republic" has been agreed; a new constitution should be established and released. However, the discussion among the parties have lead to an instable political situation in Nepal since then, eventually resulting in passing the new Constitution in September 2015 but changing the government every few months (which also influences the rebuild after the earthquake)

Our next stop was probably the largest market of that kind which I have ever seen. Bamboo canes were building up the sceleton of the market, covered with blue plastic tarps to protect the goods sold and the people from rain and dirt. Hence, it was also no surprise that with a temperature of 30 degree and high humidity outside, the air inside was sticky and humid. I personally was most impressed by the booths selling bright and shiny fabrics in any color you might imagine - but other than that there was nothing which could not be bought at that market. 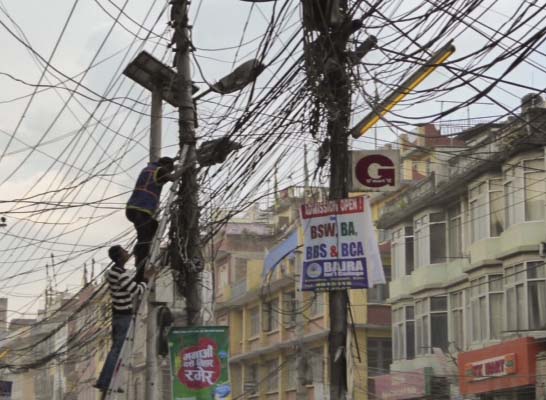 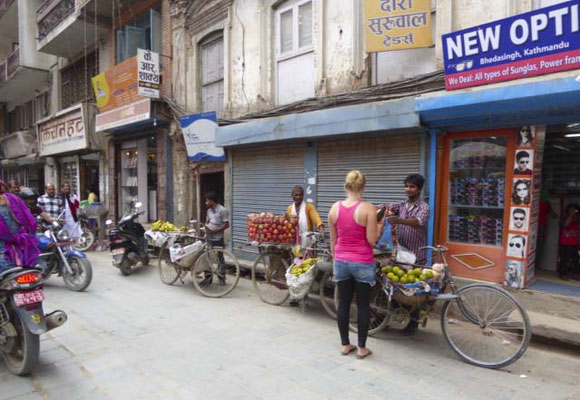 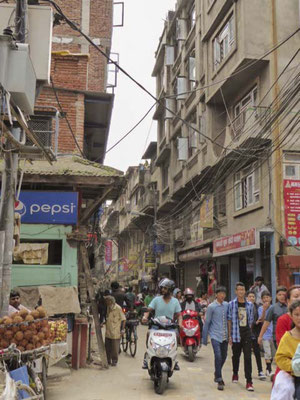 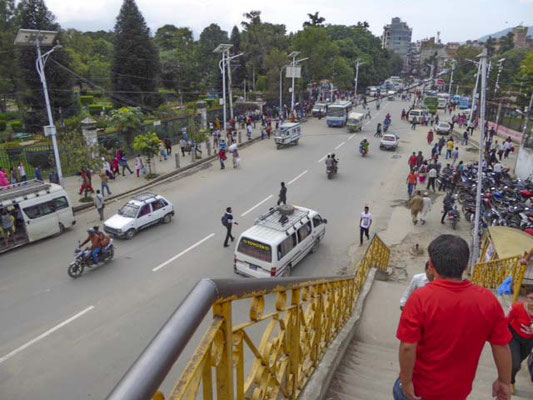 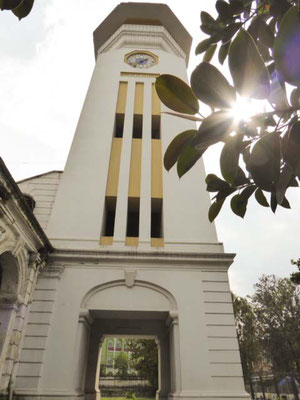 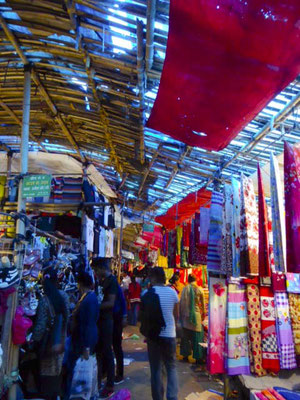 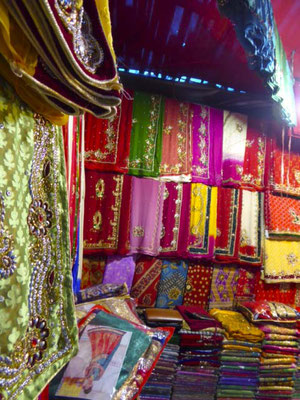 On the next day, we decided to visit the largest temples of the two major religious groups in Kathmandu - 81% of the Nepalese population are Hindu, followed by 9% Buddhists (per 2011). Our first stop brought us to the Pashupatinath, the largest Hindu temple in Nepal. This is where Hindus cannot only honor Shiva, the most important goddess, but also honor the remaining approx. 33.000 goddesses, make sacrifices and bury the dead. It was impressive how close life and death, everyday life and religion, people and animals were in this place. But since such a place is hard to describe, just have a look at the pictures 😃 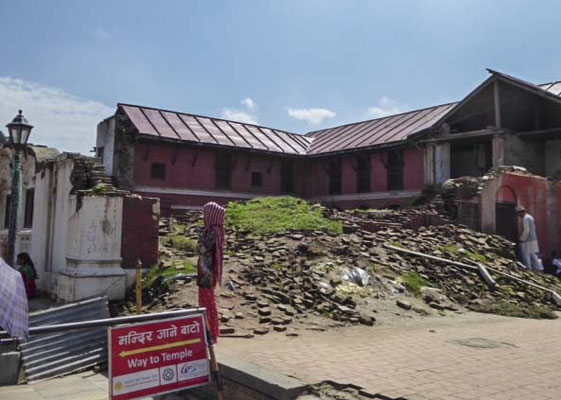 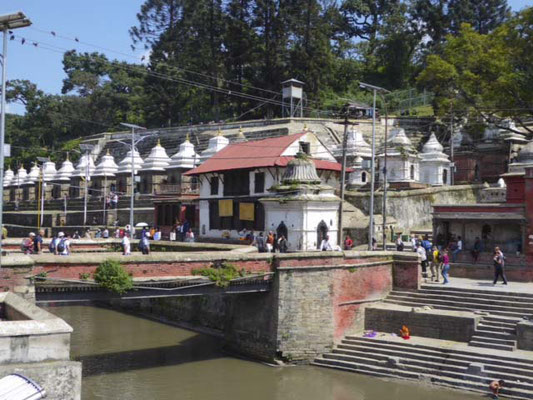 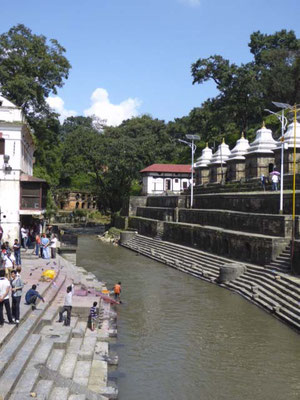 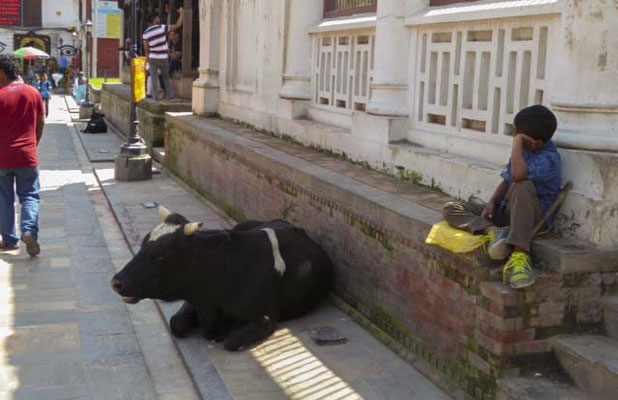 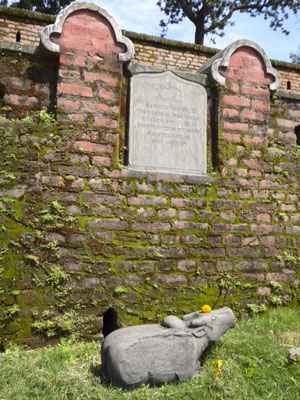 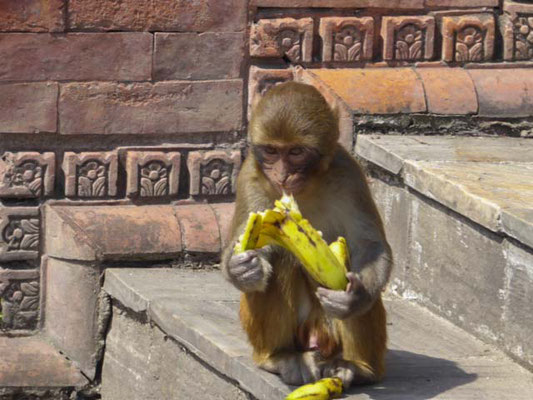 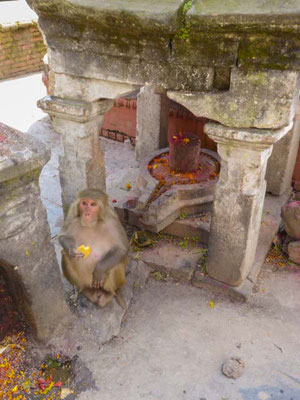 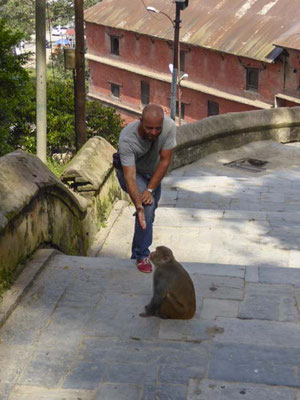 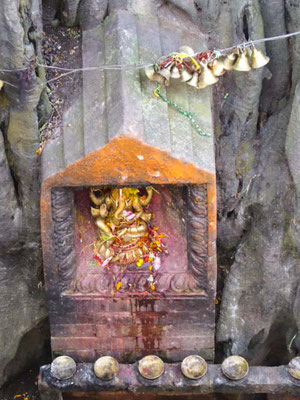 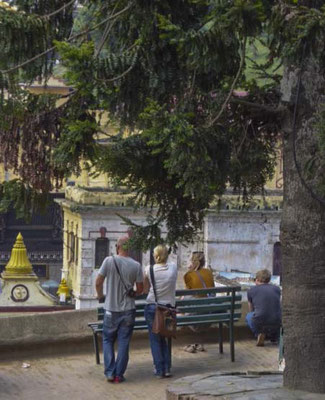 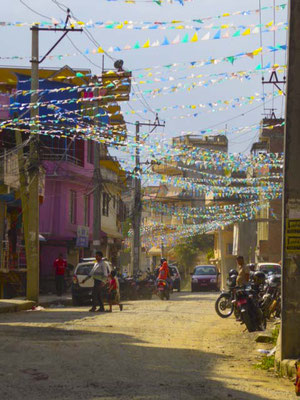 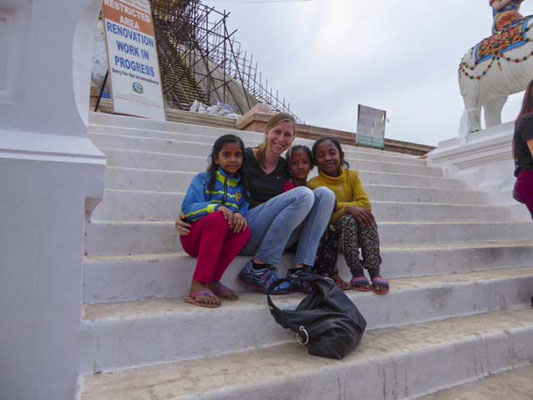 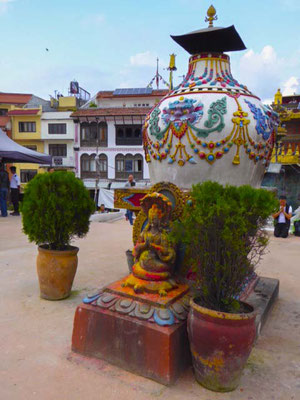 On my last day, Ann-Katrin and myself would not only get ready for the day with a yummy breakfast but also with a local yoga lesson which was really good fun! Deeply relaxed we met Jörg at the Guesthouse and headed off towards Durbar Square and Swayambhunath. Durbar Square is the area in front of the old royal palace of the former Kathmandu Kingdom, firstly used as such by King Ratna Malla (1484-1520). It was one of three Durbar Squares in the Kathmandu Valley in Nepal, all of which are UNESCO World Heritage sites today. The square was surrounded by approx. 50 pagoda, temples, and palaces, mostly wood-based and proofing the skills of the Newar artists and craftsmen over multiple centuries. Unfortunately, the damages of the earthquake in April 2015 were significant and some buildings have even been destroyed completely (partially, they are currently being rebuilt). I personally considered the Temple of the Living Goddess and the context of it to be the most interesting and striking. The Living Goddess is a girl that is being honored as Goddess until puberty. With the beginning of the puberty, she looses the status of the Living Goddess and the succeeding girl is elected. Prerequisites are the girl's age (between 3 and 5), her family's status and her face which has to be "perfect". Once a girl has been elected, only she moves into the Temple of the Living Goddess where elected women take care of her and at predefined events the Living Goddess will be carried through the city on a barrow, honored by the faithful. During her time as Living. Goddess, her family receives benefits and is allowed to visit her but not to stay overnight.

Swayambhunath is a temple complex, build on a hill in the Western part of Kathmandu. The major element is the Buddhist stupa which is said to be one of the World's oldest - some parts are estimated 2.500 years old. The damages caused by the earthquake were just about to be removed while we were visiting and soon the complex will be back in its old shape. 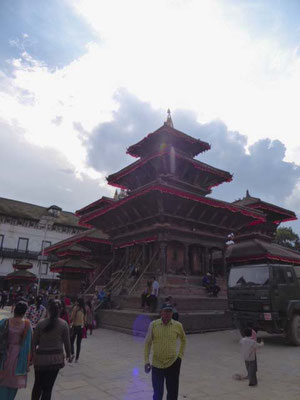 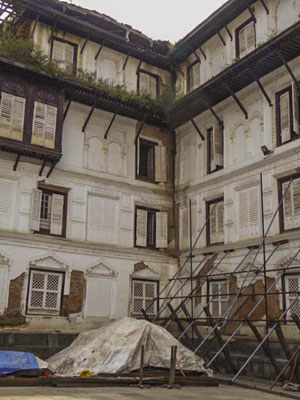 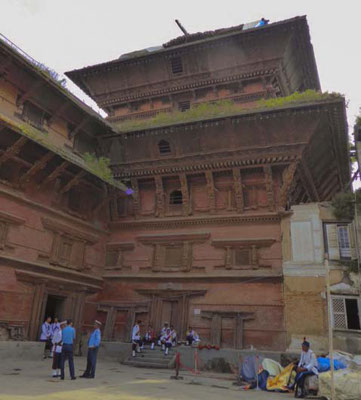 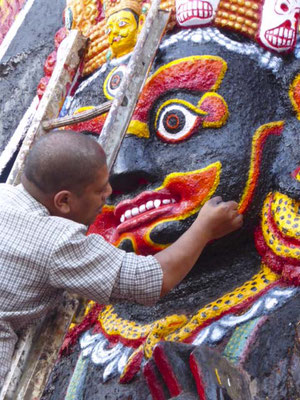 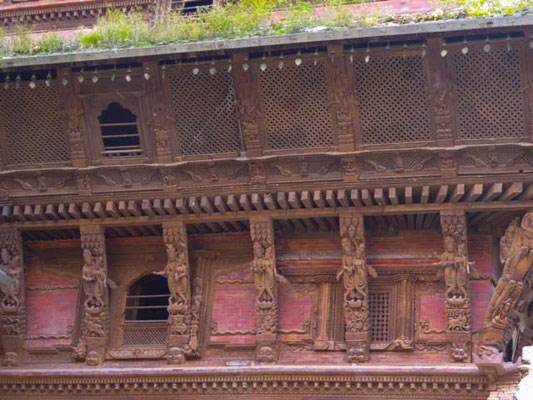 Time was flying way too quickly and at the end I gathered many impressions and experiences which I will think about. But the best of all was to meet the two of you again - a heartfelt THANK YOU!!! for that! In the end, it doesn't really matter where you are traveling but with whom - just like a Chinese saying expresses:

“To meet an old friend in a distant country is like the delight of rain after a long drought!"